Raising the bar with Straight No Chaser

We’re thrilled to announce that groups participating in AUSACA Australian A Cappella Championship this year will also be in the running to receive some amazing aca-perks thanks to USA a cappella stars Straight No Chaser (who are touring Australia in July)! The AUSACA groups (in WA, QLD, NSW and VIC) with the highest total score (judges score plus audience vote) for their AUSACA Video Entry will win the opportunity to:

*Only one group (from all divisions combined) in each state (WA, QLD, NSW and VIC) will receive this opportunity.

STRAIGHT NO CHASER AUSTRALIAN TOUR DATES PERTH: Astor Theatre – Wednesday 13 July BRISBANE: The Tivoli – Friday 15 July SYDNEY: York Theatre, Seymour Centre – Saturday 16 July MELBOURNE: The Palms At Crown – Sunday 17 July AUSACA Video Entries are due 13 May, 2016. Video judging and voting period is from 20-31 May. Winners will be notified on Monday 6 June Winners will be announced to the public on Wednesday 15 June. APPLY NOW For further details about AUSACA head to: ausaca.com 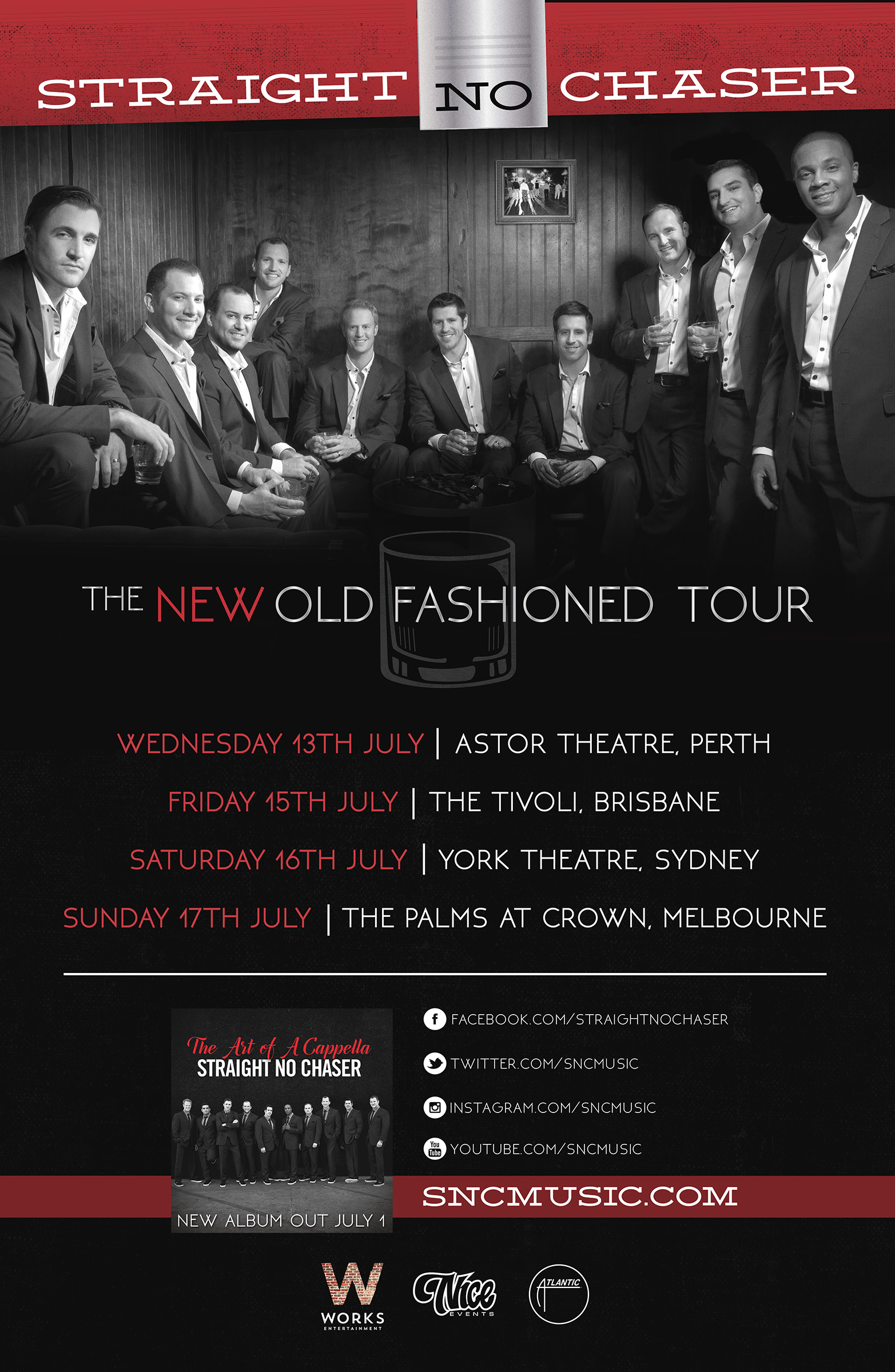 About Straight No Chaser
If the phrase “male a cappella group” conjures up an image of students in blue blazers, ties, and khakis singing traditional college songs on ivied campuses… think again. Straight No Chaser (SNC) are neither strait­laced nor straight­faced, but neither are they vaudeville style kitsch ­a​nd they’re coming to Australia this July!​ As group member Randy Stine comments, “We take the music very seriously; we just don’t take ourselves too seriously.” In the process, they are reinventing the idea of a cappella on the modern pop landscape. Originally formed two decades ago while students together at Indiana University, the group has reassembled and re­emerged as a phenomenon ­ with a massive fan base, more than 80 million views on YouTube ​and proven success with holiday releases, 2008’s HOLIDAY SPIRITS and 2009’s CHRISTMAS CHEERS as well as WITH A TWIST (their first full length departure from holiday music (2010), UNDER THE INFLUENCE (2013), UNDER THE INFLUENCE: HOLIDAY EDITION (2013), THE NEW OLD FASHIONED (2015) and THE ART OF A CAPPELLA (a 2 CD deluxe edition of songs picked by Straight No Chaser from their catalogue for this special edition ­ available 1 July, 2016). Under the Influence ​f​eatured guest artists including S​ara Bareilles,​ Phil Collins, Elton John, Jason Mraz,​ D​olly Parton, Seal, Rob Thomas and Stevie Wonder.​ Their 2013 Holiday EP, titled U​nder the Influence: Holiday Edition​ included a track with the legendary Sir Paul McCartney​ and their 2014 Christmas track entitled T​ext me Merry Christmas featured singer/actress Kirsten Bell. The group originally came together in 1996 at IU, basically as 10 guys who happened to be good friends who also liked to sing. Choosing the members carefully for personality as well as vocal talent, SNC set itself apart from other a cappella groups with its contemporary repertoire and dynamic approach, quickly headlining concerts both in Bloomington and on road dates. When the founders began graduating in 1999 and went on to jobs mostly outside of music, they chose replacements and established SNC as an ongoing group on campus with future generations of ambitious IU undergrads. More than 100 members have passed through the group’s ranks so far. Such was the impact SNC made at IU that the school hosted a 10th anniversary reunion show for the original lineup in 2006, and when Stine posted clips from a 1998 concert on YouTube, SNC’s fan base grew exponentially. In 2007 alone, the group’s version of “The 12 Days of Christmas” was viewed more than seven million times. Today that number has surpassed 20 million. Straight no chaser is the real deal, the captivating sound of ten unadulterated human voices coming together to make extraordinary music that is moving people in a fundamental sense… and with a sense of humour. On the road, Straight No Chaser has built a reputation as an unforgettable live act.
Australian audiences are in for a treat of beautiful harmonies, much loved songs with not a blue blazer in sight! NEW ALBUM OUT JULY 1 (The Art of A Cappella)­ Follow Straight No Chaser: Website | Facebook | Twitter | Instagram | Youtube