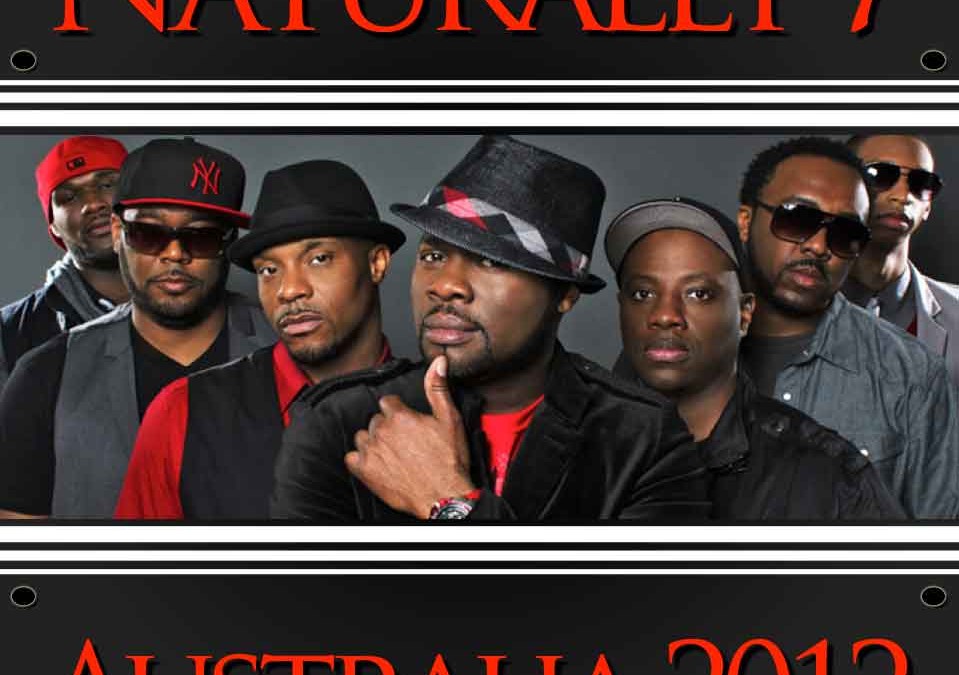 On a very cool Melbourne night at the Palais Theatre this month, I had the pleasure of seeing Naturally 7, the powerhouse vocal play (not a cappella!) group from New York City. Before the main act, the audience was treated to the percussive and innovative vocal soundscape styling of up-and-coming Brisbane act Tom Thum. The highlight of Thum’s 15 minutes of glory was his ability to manipulate his voice and microphone effects to produce an incredibly realistic horn sound, which, combined with his blues scale improvisation made by live-looping, proved to be a real crowd pleaser. It seemed the audience had never seen anything like it before. Thum displayed impressive stage-presence getting laughs almost every time he paused to talk… in a silly made up voice. Next time, will the real Tom Thum please stand up!

Now to the main act, the act we’d all been waiting for, the act which was discovered and pushed into the limelight by Mr. Michael Buble himself, Naturally 7. But before the show started, suspense of course had to mount, expectation had to rise and the crowed had to get amped… this all happened in the 10 minutes immediately after Thum had left the stage. After 50 minutes of crowd pleasing musack… jazz has never been so dull however, we were still waiting. Finally, after the technical difficulties had been sorted (not that we were told what happened!), the lights darkened, the ‘natural’ looking sign of Naturally 7 appeared and the vocal play had begun.

The show started with their original track ‘Falling’ which transitioned into ‘Satisfied’, showcasing the outstanding booming Hops on bass who literally made the floor vibrate! The group showcased their incredible talent, not only as remarkable human musical instruments but their voices were put to the test with their operatic start to ‘Satisfied’. Naturally 7 are the absolute real deal in all aspects of vocal prowess. Exhibiting true artistry, the performance flowed timelessly. As soon as the main soloist, Polo, enveloped the crowd with ‘Broken Wings’, I was sold. This man can SING. The simplicity and effectiveness of Naturally 7’s choreography was showcased throughout and is something contemporary a cappella groups should take note of, in order to progress beyond the a cappella bob (step-together-step-together).

A complete and utter highlight of the night was the performance of what has become Naturally 7’s staple song, ‘Wall Of Sound’. This showcased the intricacies of vocal play as opposed to a cappella, as well as each individual’s unique talent. Roger’s effortless and stylish leadership, characterized by his suave glasses, shone through as he kicked off the opening rap; Warren was air-drumming to his fullest, giving the most lifelike vocal percussion I have ever heard; Rod and Dwight produced a horn section that even Louis would be proud of, whilst Polo displayed a disturbingly real distorted guitar sound and Hops continued to KILL on the low end.

A real highlight of the night came when Naturally 7 stepped away from the microphone as if to ‘prove’ to the audience that a cappella is the truest of vocal art forms and demonstrating that their natural singing ability can stand strong on its own merits. They performed an incredible medley of songs by Simon and Garfunkel to a near capacity crowd. Opening with ‘Sound of Silence’, then ‘Scarborough Fair’ and finally ‘April Come She Will’, the incredible arrangements paid true testament to the fact that honest musical complexity was still clearly evident amidst the bells and bright lights! As the show drew to an end the crowd wanted more, and ‘naturally’ they delivered! A stirring rendition of ‘As My Guitar Gently Weeps’ was followed by the big dance number ‘Ready or Not’, in which the audience was encouraged to dance along (although most already were), with Hops stepping forward for a vocal solo, galvanizing the room, leaving everyone’s entire body tingling.

Naturally 7 have once again proved themselves to be the group to watch at the forefront of the vocal world. It was an outstanding performance by one of the most innovative and exciting groups in the music industry today. Congrats!

Sam Fischer is a recording artist and singer/songwriter originally from Sydney Australia. Sam has been featured as a soloist in the New South Wales Department of Education ‘School’s Specatcular’, the Opening Ceremony of the Youth Olympic Festival and in the World Vision Charity Concert ‘Don’t Trade Lives’ at the Sydney Conservatorium of Music. Sam is 20 years old and currently studying in his second year at the Berklee College of Music in Boston, MA and sings with Berklee College of Music’s award winning a cappella group, Pitch Slapped.