Naturally 7 are about to return to tour Australia and New Zealand on the back of an electrifying European arena tour sharing the bill with Mick Hucknall (Simply Red) and The Jacksons, and guesting with Michael Bublé and Coldplay.

Vocal Australia are delighted to be able to give away some FREE DOUBLE PASSES to their solo shows in Auckland (24 May), Sydney (29 May), Brisbane (30 May) and Melbourne (1 June) shows.

If you’d like to be in the running to win Naturally 7 tickets and get your hands on these highly sort after tickets then:

3) Complete the Naturally 7 Competition online entry form (below) by 5pm on Wednesday 14 May, 2014

Winners will be notified by email on Thursday 15 May 2014. 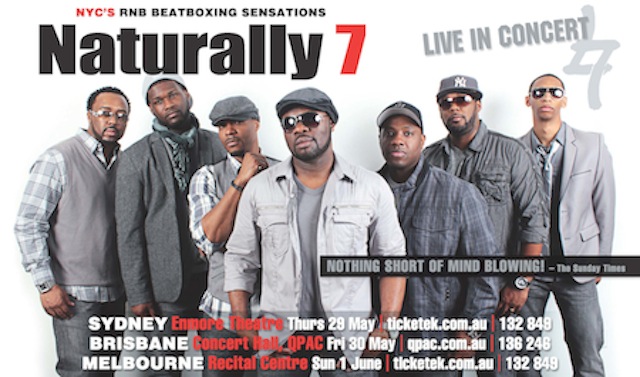 Formidable…energizing…they are magnificent. – The Guardian, UK

The almost three- hour show was nothing short of mind- blowing. – The Sunday Times

Captivating a broad, cross-generational audience with their irresistible mix of Bronx street cred’ and showmanship, N7 are an R & B / Urban / Soul phenomenon that must be seen-to-be-believed. Taking a cappella to the next level in style they dub ‘Vocal Play’, astonishingly they pump out not just the melodies and harmonies, but the sounds of drums, guitars, horns, strings, turntables and beats – using nothing but the human voice!

Covering a wide mix of music, N7’s performances include sensational interpretations of pop classics by iconic groups such as The Beatles, Seals & Crofts, Coldplay and Queen, music born out of collaborations with Jazz luminaires Herbie Hancock, Quincy Jones and star rapper Ludacris, alongside self – penned hits.

On the back of an electrifying European arena tour sharing the bill with Mick Hucknall (Simply Red) and The Jacksons, and guesting with Michael Bublé and Coldplay, N7 are primed to deliver a show which was described by The Sunday Times as ‘nothing short of mind-blowing’.

Oops! We could not locate your form.