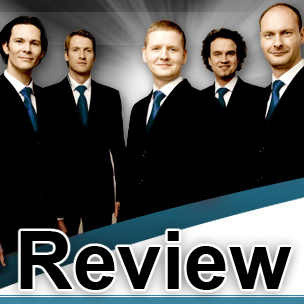 Amarcord are a five part male acapella group from Leipzig. The group is made up of Wolfram Lattke and Martin Lattke on tenor, Frank Ozimek on baritone and Daniel Knauft and Holger Krause on bass. All five members of Amarcord are alumni of the St Thomas’ Church Choir in Leipzig, and have been singing together since they were children as a part of this choir. St Thomas has a proud music history. The St Thomas’ Church Choir first performed in 1212 and a particularly noteworthy aspect is that J.S. Bach was the choral director of the church from 1723 until his death in 1750. This tradition and heritage is an integral part of the music that Amacord makes.

Amarcord are currently on a tour of Australia and aim to “use this historical knowledge to improve our contextual understanding of musical performance and exression in the past, and to shed new light on the emotional behaviour and health of modern Australians.” (Musica Viva)

The program they performed was titled “The Singing Club – Four Centuries of Song”, and was a collection of renaissance madrigals, songs by Schubert, Schumann, Elgar, Grieg and others, and finished with a collection of folk songs from around the world. The program was well crafted, with each half beginning seriously and becoming more light-hearted.

The repertoire was performed almost entirely in German, however, the group bridged the language gap quite successfully with their musicality, gestures and interaction with the audience. Most of the time, you did not need to read the translation to understand what the songs were about. It was definitely worth reading the translations for the madrigals, however, as some of the intricacies and language jokes were lost in translation. One of the highlights was a madrigal, “Quand je boir du vin clairet”, in which the tenor appeared to become more and more intoxicated with every verse. The group were very flirtatious with the audience, which helped build a charming and light-hearted atmosphere.

The musicality of the group was excellent, and the diversity of their repertoire showed this very well. It was clear that every performer had a deep understanding of every piece and its musical context. This made for an incredibly engaging performance.

There were many highlights in this concert. The most beautiful piece would have been the song cycle by Cras (1878-1935), “Dans la Montagne”, which opened the second half of the program. It was a stunning performance and it really showed off the groups range of dynamics and musical colours.

Another highlight was in the folk song section of the program, when the audience was asked to participate. The members of Amarcord had the audience sing along (in two parts!) to a folk song from Ghana. The folk songs were a great way to end the program. They were not as stylistically accurate as the rest of the program, but they were alot of fun and showed off some of the groups other talents (particularly from one of the tenors who proved very good at imitating different instruments.) This section also allowed them to finish with an Australian encore of “Skippy the Bush Kangaroo”, which resulted in Skippy being eaten as a sausage.

There was not much room for improvement in this performance, however, the folk songs were the only part of the program that was memorised and performed without the scores, which improved the connection with the audience. It would have been nice if a little more of the program was performed from memory.

Overall, it was an excellent concert and made for a fun night out.