REVIEW: Out Of The Blue

Oxford University’s premier all-male a cappella group, Out of the Blue (OOTB) has been wowing audiences since 2000.  Regularly selling-out their Edinburgh Fringe Festival shows, 2011 marks their 8th year at the Fringe.  The group has since gone on to be named the European Collegiate A Cappella Champions three times and as a result have had the opportunity to compete at the International Collegiate A Cappella Awards in USA finishing on the podium in 2nd place twice.  With an impressive 12 CDs to their name, OOTB recently made it through to the semi-final of Britain’s Got Talent earlier this year.

OOTB’s shows are without a doubt packed full of entertainment.  Keen to please every audience member the boys present a finely tuned show complete with clever and hilarious choreography that never fails to lift the energy and roar of the audience’s applause.  OOTB’s performance of ‘Use Somebody’ demonstrated the group’s ability to sing with great intonation, warm tone, well built swells in dynamics and great phrasing to help shape the piece.

OOTB’s show contained simple but effective lighting plots that helped to enhance the songs.  The group performed without any microphones, which made it harder to hear the soloists and beatboxers when they were performing songs with lots of movement on stage.

There were numerous highlights throughout the show with their mash-up of ‘Beautiful Day’ and ‘Firefly’ showing the strength and power of their voices while ‘Mustang Sally’ begun with a creative car-inspired choreographed introduction that featured yet another brilliant lead solo.

Some of the singers in OOTB had a slight tendency to over act the lyrics.  This was more obvious during their ballads such as ‘Always a Woman to Me’ that was performed with great passion by some but lacked genuine delivery of the lyrics by others.  As a stickler for intonation, there were a few times where their vowels were not blending resulting in the harmonies not quite locking in.  Though for a group full of young males whose voices are still developing there were surprisingly only a few moments where the limitations of their vocal range and tone quality were more obvious to the audience, such as the bass notes that were a tad too low during ‘Don’t You Want Me Baby’.

With half of their show consisting of mash-ups, Out Of The Blue managed to squish a great mix of energetic, entertaining and heart-felt songs into their Edinburgh Fringe show that allowed them to highlight the versatility and talent of every singer and beatboxer in their group. 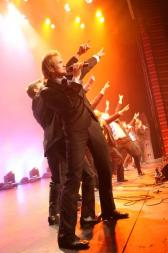